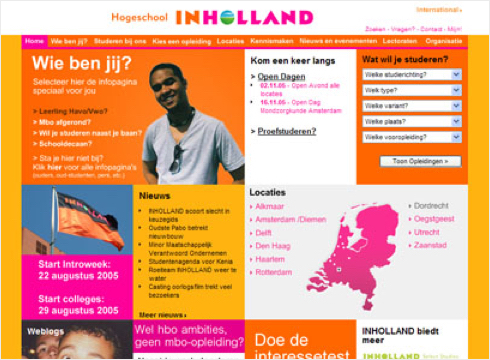 In 2002 four large universities spread out over several cities in the western part of the Netherlands merged under the new name Inholland University.
As part of the extensive rebranding program a new and integrated Internet portal was built for the whole group. The main objective for this first release of the portal was recruitment of new students.

Satama Interactive Amsterdam was commissioned to design the new Internet portal.
Much effort of the team in the early phase went into user research of (prospective) students as integral part of the concepting.
Another main driver for the concept and design was the challenge of extending Inholland’s new brand architecture to the Internet. Despite the merger under a single brand, the regional characteristics of a specific school were still very important for prospective students.