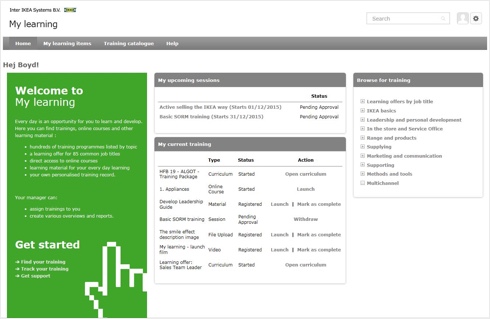 Inter IKEA Systems B.V. (IIS) is the owner of the IKEA Concept and worldwide IKEA franchisor. IIS is located in Delft, the Netherlands.

IIS – through its business unit IKEA Competence Development – has the global assignment to strengthen the IKEA culture and enable IKEA people to develop their competence to meet customer and business needs.

To support competence development for over 150,000 IKEA Co-workers worldwide IIS has implemented a third party Learning Management System (LMS). The LMS is delivered as SaaS and customized (within limits) to the needs of IKEA.

As the LMS was in the process of being implemented and set up, IIS needed to have a better insight in the system workflows of the different users. Mainly of the central and local administrators responsible for managing the content and for supporting the local stores and regional offices.

The goal was to have a comprehensive set of system workflow diagrams that could be used for internal training of the Admins.
A second goal was that the flows could also be used in discussions with the vendor regarding customisation. And also to give feedback regarding the usability of the LMS in general.

Together with the project lead and with input from IIS Admins and fellow IKEA UX designers, I captured the system workflows through user walkthroughs. And also through detailed analysis of the available instruction guidelines from both vendor and IIS.

I have put much effort into trying to make the resulting PDF document itself usable for readers by using link-buttons by which the reader can easily drill-down (and back up again) from the table of contents to, for example, a specific workflow at screen-action level.

The second section has the Learner’s (i.e. Co-worker’s) User Stories as focal point. The Learner, of course, being the main ‘customer’ of the system.

Both are described in detail in the next two slides.

The tools I used were:
Paper sketches; Powerpoint for presenting and discussing early ideas; Visio for creating the flows; and Acrobat for delivering the final interactive PDF.