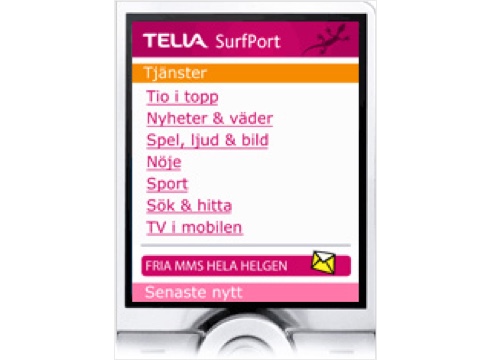 In the first half of the 2000s all major telecom operators launched a mobile portal to deliver mainly information services to their customers via the mobile channel.

Telia in Sweden and Sonera in Finland already had their own branded portals but the group’s strategy was to have one clearly branded portal for all countries.

SurfPort was launched in Sweden during Spring 2005 with Finland, Denmark and Norway soon following.

From 2004-2005 Satama Interactive was the digital consultancy partner for the TeliaSonera group and responsible for design and delivery of TeliaSonera’s mobile and web presences.

For SurfPort I worked closely together with a senior visual designer in the strategy, concept and design phases resulting in the delivery of a production prototype as input for the Satama and TeliaSonera development teams.

Main focus was on e-branding, usability and on ensuring a good performance of the mobile site.

For the latter we came up with a light and flat design, based on text and light graphics instead of on imagery. To streamline content management we laid down a system of ‘stackable’ standardised content-modules with which pages could be composed.